Are Jets Safer Than Turboprops?

One of the most common concerns people have when traveling on an aircraft with propellers is that it lacks the safety of a jet without propellers. Why the fear? Perhaps the concern is related to the additional noise produced by turboprops. Could it also be that the sight of a propeller on an engine renders a perception of an amateur or more antiquated aircraft? Well, let’s clear the air for those who are unsure.

Myth Busted: Turboprops are equally as safe as jet engines. In fact, turboprops and jets both have turbine engines and are virtually the same thing. 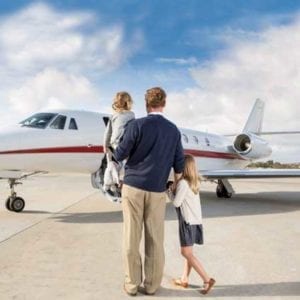 What is the Difference Between a Turboprop and a Jet Engine?

Turboprops and jets are both built with a turbine, or jet, engines. Jets have turbine engines encased with fan blades while turboprops have a propeller on the outside. This is much different than with piston engines, which also have propellers, but are much different mechanically. Turbine engines are safer and more reliable than piston engines, which are typically found in smaller aircraft.

What are the Advantages of Turboprop Aircraft?

Turboprops might be a little louder, but they are actually safer than jets when going into smaller runways. Why? It is related to the turboprops capabilities under short runway conditions. One of the things we look at when planning a flight is something called ‘balanced field’. When you get up to takeoff speed, if something were to go wrong, how quickly could you stop? In a nutshell, this is what we consider when talking about ‘balanced field’. Turboprops are able to respond and stop much more quickly because the propellers provide extra drag. Thus, the propellers help the aircraft stop when needed.

What is the Real Aircraft Safety Question?

Now that we understand that a turboprop is a turbine (or jet) engine with a propeller on it, let’s talk about the questions I like to ask.

The real question. What’s safer? The turbine or the piston engine? I believe in turbine engines and two engines on an airplane. Turbines and the redundancy of two engines present much more of an assurance of safety than pistons and single-engine aircraft. This is also the subject for another blog post.

Have we missed any of your concerns? Would you like to learn more about this? If so, please let us know in the comments section of this post. Contact Schubach Aviation by phone 760.929.0307 or by email charter@schubachaviation.com

Schubach
0 Comments
Previous post
Preparing For a Charter Flight: What You Need To Know
Next post
4 Basic Safety Questions You Should Ask a Jet Charter Company Before Booking a Flight