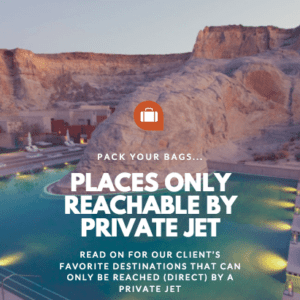 One of the fundamental perks of private aviation is the ability to easily reach destinations that cannot be accessed by commercial flight, saving precious time— for more R&R.

Simply put, flying private allows you to make the most out of your time away. With direct access to many more airports (5,000+ in the United States alone) you’ll arrive closest to your destination, in the shortest amount of time. Read on for our client’s favorite destinations that can only be reached (direct) by a private jet:

Set on 600 acres of expansive desert in South Utah’s Four Corners region, the ultra-private Amangiri resort (or ‘peaceful mountain’) is the jetset’s favored destination of late and can only be accessed by private jet or a five-hour (or more) drive from Las Vegas, Nevada.

Hawaii’s sixth-largest island, Lanai (or the Island of Enticements), is also its least inhabited— offering tranquility and reprieve from the outside world. Flying private is the only direct route to visit this celebrity-favorite escape from the mainland, unless you take a hour-long ferry from a nearby island.

World-famous St. Moritz, located nearly 6,000 feet above sea level, is one of the Alps’ first winter resorts (since 1864). Flying private allows powderhounds to land just 5 km away, at Samedan Airport in Engadin Valley, so they can hit the winter wonderland’s 218 miles of ski runs in no time— whereas the nearest commercial airport is more than three hours away.